Islamic taweez in the culture of Kyrgyzstan muslims

It’s no secret that the locals in Kyrgyzstan are big believers in taweez. You see them everywhere—in people’s homes, around their necks, and even on their cars. 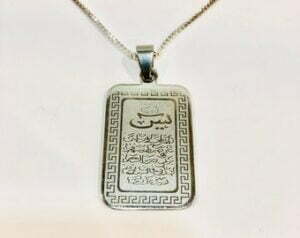 But why are they so popular? There are a few reasons. For starters, the Kyrgyz people are very religious and see taweez as a way to protect themselves from harm. They also believe that taweez can help them achieve their goals in life.

And finally, many people in Kyrgyzstan see taweez as a symbol of wealth and prestige. So it’s no wonder that they’re so popular here!

The History of Taweez in Kyrgyzstan

Kyrgyzstan is a predominately Muslim country; as such, taweez play a big role in the culture. Taweez are amulets thought to protect from evil and bring good luck. They’re typically made of silver or gold and are inscribed with Quranic verses or prayers.

You’ll see a muslim taweez everywhere in Kyrgyzstan—men wearing them around their necks, women wearing them as pendants, merchants selling them in bazaars. And they come in all shapes and sizes. Some are pretty simple, while others are quite elaborate.

The history of taweez in Kyrgyzstan is a long one, and it’s steeped in tradition. Muslims have used them to ward off evil and bring good fortune.

When you visit a Kyrgyzstan bazaar, you’ll see all sorts of Islamic taweez for sale.

You may be wondering how taweez are used in Kyrgyzstan. Well, people wear them for a variety of reasons. Some people believe they provide guidance and help them stay on the right path, while others think they offer protection from evil spirits. And some people even believe that they can help cure illnesses.

So there’s no one answer to the question of how taweez are used in Kyrgyzstan. It varies from person to person. But one thing is for sure—taweez is an integral part of the culture and holds a special place in the hearts of many Muslims in Kyrgyzstan.

What do taweez look like? This is a good question and one that deserves a good answer.

Generally speaking, taweez are small amulets inscribed with Qur’anic verses or prayers. They’re often made of silver or gold and can be worn around the neck or wrist. In Kyrgyzstan, they’re considered very powerful and said to bring good luck and ward off evil.

Most people in Kyrgyzstan believe in the power of taweez, and they often turn to them for help, from finding a job to stopping a divorce. If you’re ever in Kyrgyzstan, keep an eye out for these amulets, as they can be a fascinating part of the local culture.

So you want to learn how to make your taweez? Kyrgyzstan is the perfect place to start. Here, Islamic taweez are an essential part of the culture, and people of all ages wear them for protection and good luck.

There are a few things you need to know before you get started. Most importantly, taweez should be made with positive intentions, and you should always ask Allah for guidance.

Here’s how to make your taweez in Kyrgyzstan:

Here are a few pro tips for using taweez in Kyrgyzstan:

Read also: Facing It Cost to Hire the Interim Pastor?

What on earth is Involved in a Dental Filling?

Often the Growing Problem Of Specifications In Nigeria: What Can Most of us Do To…

Existence Jackets For Kids, US Shoreline Guard Approved, What Does This Mean?

Prev Next
Leave A Reply
Cancel Reply
Stay With Us

Often the Growing Problem Of Specifications In Nigeria: What…